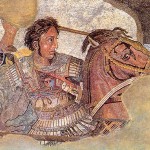 Justice being taken away, then, what are kingdoms but great robberies? For what are robberies themselves, but little kingdoms? The band itself is made up of men; it is ruled by the authority of a prince, it is knit together by the pact of the confederacy; the booty is divided by the law agreed on. If, by the admittance of abandoned men, this evil increases to such a degree that it holds places, fixes abodes, takes possession of cities, and subdues peoples, it assumes the more plainly the name of a kingdom, because the reality is now manifestly conferred on it, not by the removal of covetousness, but by the addition of impunity. Indeed, that was an apt and true reply which was given to Alexander the Great by a pirate who had been seized. For when that king had asked the man what he meant by keeping hostile possession of the sea, he answered with bold pride, “What you mean by seizing the whole earth; but because I do it with a petty ship, I am called a robber, while you who does it with a great fleet are styled emperor.“

via The biggest pirate of all.

Thus wrote Augustine of Hippo in his City of God.

What is the difference between a pirate and an emperor? The emperor can offer safe passage over the sea. An emperor can get income from both the originating and the destination port cities and so be motivated to not discourage ocean trade. The pirate can only take as much as he can get at the moment. He has no long term basis for income beyond what he is able to hunt down.

Is it “worth it”? I have no idea how anyone can calculate that. God has allowed empires to arise, and not always (or exclusively) as punishments on the people under them.

We might think about modern republican forms of government where office holders only possess a position of power temporarily and have no authority to dictate their successor. Are such people, only able to benefit in the short term from their decisions, going to behave more like an emperor or king who hope to pass on a thriving inheritance to an heir, or like a pirate getting what he can when he can?

In World War I, the American government worked to destroy Christian empires and dethrone royal dynasties. One might ask if we have essentially criminalized family businesses and replace them with publicly traded companies as the only allowable form of corporation.

The results may not be sustainable.