If you don’t want to read my post, or even if you do, watch this:

Sometime in December, after my last birthday but before Christmas, I started the no contract $10+ gym “membership” (the + is because of an annual fee you pay to keep the $10 from changing). Later, I changed locations before realizing that the closer newer gym had much more restricted hours for the cheap non-membership so I ended up springing for the $20/month 1-yr obligation. (Supposedly I get to go month to month afterwards, but I’m sure some fine print will suddenly spring out at me then).

If you’re worried about how you look (lean and all that) I’m not going to have much to say to you. I have thinned out in places that I hadn’t noticed could thin out, but the stuff I notice in the mirror that reminds me I’m not a teenager any more is not changing noticeably. I think it shows weakness of soul that I am even aware of this.

But if you are wondering if you can feel better and do more and perhaps sleep better and be more comfortable “in your skin”–as the cliche goes–I may have a few things to say that are helpful.

Since I never ever go to the doctor, I can’t tell you anything about health in any objective sense. I feel stupid I did not begin by getting my blood pressure checked at one of those cuff machines in grocery stores… but I didn’t think of it at the time.

Also, I changed up my eating at about the same time I started visiting the gym, so I have not tracked independent variables. I’m somewhere between paleo and low-carb. The differences between now and past low-carb attempts are 2, as far as I can tell. 1: I purposefully pursue vast quantities of fat, especially in the morning (butter and coconut oil in my coffee). 2: I never look at processed “low net carb” snack bars or anything that keeps me using wheat. Again, I don’t have a physique that allows me to write in a testimonial to Mark’s Daily Apple or RobbWolf.com. I started doing this and within a month realized I never wanted to eat any other way ever again. It doesn’t feel like a diet. It feels like I kicked a drug addiction. I don’t think a day goes by that I am not grateful to have discovered this and managed to try it long enough to reach the point that I noticed a change. I feel like a god, no longer subject to the cravings for snacks that I thought were normal mortal existence.

I should add that for awhile I tried the “Bulletproof Diet” plan for losing weight by fasting (other than the coffee) until 2pm. I quit for gym reasons but haven’t noticed any change in weight. 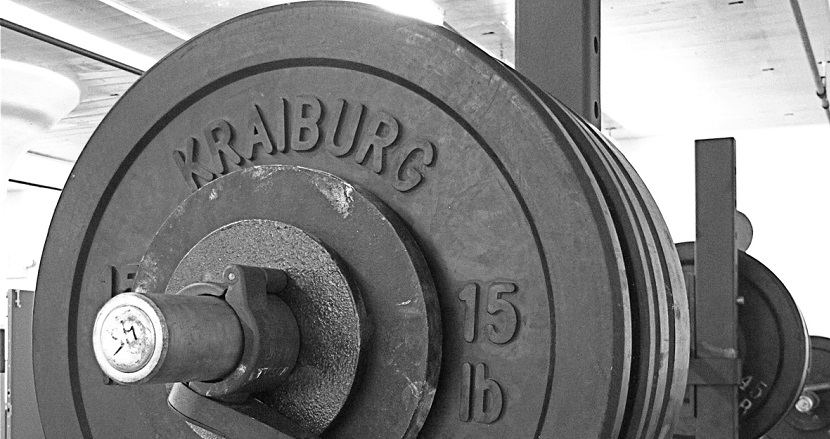 So… about the gym.

I started going and not being sure what to do. Eventually I decided the point was to spend as little time there as possible but to make progress. I wasted more time on youtube trying to learn what to do both in terms of technique and strategies than I did at the gym. For awhile I only went two days a week, but now I’m going three just to make my progress a bit better.

When I started I also went for stress release. I think the gym will help you with that, but I’ve had second thoughts about making physical activity a stress reliever for specific stressors in your life. It seems like just another “addiction” waiting to happen. Wine is good too, but I don’t think you should use it that way either.

(Yeah, wine: not 100% paleo–if butter in my coffee didn’t clue you in already [And did I mention the irony that I don’t believe in evolution?])

So I’ll skip a bit and tell you some of the later developments.

I am in the gym to make sure I can do some basic things:

1. pick stuff off the ground.

3. get off the toilet

If God wills, I would like to be able to do this stuff as long as possible. I don’t have degenerative health issues but, from what I see of common life in the 21st century, we can sometimes produce such results without meaning to. So this is all preventative. And it translates into three things:

I eventually found stronglifts.com and adopted most of it. Stonglifts along with some stuff from Mark Rippetoe of Starting Strength taught me that I didn’t need to have deadlift day separate from squat day and that I could do squats every day. (I’ve since changed back some; see below). Stronglifts also introduced me to the Pendlay barbell row which I think I like a lot though it is tricky to keep your lower back from hurting. (You hold your torso parallel to the floor and lift a barbell up to your chest with just your shoulders, back, and arms).

I never did bench press. It would be good if I wanted to do “accessory movements” to improve my overhead press. But I never had anyone to spot me and was too shy to ask for help from strangers. I also don’t see much value. If I was worried about escaping from a coffin, I could justify floor presses. But how often are you going to have free range of motion in the elbows. Also, as I sit here at my keyboard, I am constantly stretching out my back muscles and tightening my chest muscles. It is much more important to most of us to strengthen the back and pull the shoulders back.

So, for the most part, especially since late summer, I have been going to the gym and squatting with a barbell balanced on my back (resting on the shelf formed by contracting my shoulder blades together), lifting a barbell from about collarbone level to over my head with my elbows locked and my shoulders pulled up toward my ears as high as I can go, and then alternating: either deadlifting or rowing a barbell. So I had an ABA week followed by a BAB week once I started going three times.

Three exercises and then I went home. Stronglifts.com wants you to go 5×5 (Sorry: 5 sets of 5 repetitions of the lift). Eventually the weight got intense enough for me that I had to rest several minutes between each set. My gym time was exceeding and hour and a half. Hated that. Did some research and found out that the original 5×5 programs involved two warm ups at a lesser weight and then three for your max. So I changed to a 3×5. But as the weight got heavier, I still hated how much time this was taking. So now I’ve gone back to never doing squats and deadlifts on the same day.

I also think I have reached the end of how much I can try to add five pounds to the bar everytime I overhead press. I’ve “deloaded” several times (take off about 20 percent of the weight and try again each workout session to add five pounds in the hope that you will surpass plateau you could not previously exceed after two workouts trying). But even that stopped working. So I’m now trying something different with the overhead press.

(By the way, in case you didn’t realize it, these are never consecutive days; I typically do Monday/Wednesday/Friday.)

I am now getting in and out of the gym in an hour. Love that!

So what are the results? Well, I am pretty sure I am stronger than I have ever been in my life, including in high school when I meticulously did vanity workouts with lots of attention focused on chest, biceps, and triceps. It doesn’t help with sports like football, but I participated in a treetop obstacle/zipline course and didn’t even notice the effort as far as fatique or soreness afterward was concerned (also, the butter and coconut oil seem to have made my skin impervious to sunburn–no, I am not making this up).

Life is easier when everything gets lighter.

So the big challenge is mental. You have to go into the gym and adopt the fiction that all of life depends on a new level of effort, and then leave the delusion in the gym when you leave. After all, you can’t do linear progress forever. You adopt the fiction for the sake of the time you have to try your hardest. Then, you live your life and enjoy feeling better, stronger, than you can remember. But it is just a game…

In fact, it is really like a healthy arcade game. I remember feeding quarters into a machine in college–always questing for new “gains.” And what happened when I cleared off a level? I had to face a harder wave of hostile creatures. So the feeling of triumph would give way to “Oh crud, what do I have to do next?!”

And that is pretty much the feeling I get at the gym: “Oh crud, next time I have to add five pounds.”

Pretty soon I’ll reach my potential in all the lifts and have to try something different. I won’t do complicated schemes that require more time and attention to make further progress. I’ll do something simple that keeps me bumping against my ceiling. I want to make sure I lift to live, not live to lift.

And I also might pursue other methods. A little while ago my daughter challenged me to try a chin up. I shocked myself by getting up to eye level or higher. A year earlier I would have told you that would require a sprinkling of pixie dust and happy thoughts. I didn’t think a single chin-up would be a reasonable possibility unless I lost a lot more weight.

I don’t endorse bodybuilding (or condemn it), but if you need to know this, your body does change. I used to have a visible corner to my quadricep in high school and college, now I have two corners on either side of my leg. (If you are expecting a picture you don’t know me at all.) Everything gets harder.

Oh, and if you are really sore every time, you are doing it wrong as far as I can tell. I can see getting sore at the beginning or when you do something new for the first time. But mostly I just feel energized now.

My advice would be to do the program at stronglifts.com for as long as it makes sense. Start at the 5×5 and then move to 3×5 when it starts to take too long. Just make sure you don’t take it too seriously once you leave the gym.

And don’t write a long blog post about what you have been doing. That’s just pathetic.

Postscript: I forgot to mention that I stopped my bulletproof fasting because I became concerned that it was slowing my progress. That’s the another thing that happened: priorities shifted. If I could gain weight to get stronger, I would. (I haven’t gained any, but just saying).

2 thoughts on “Lifting Weights for Getting Stronger”