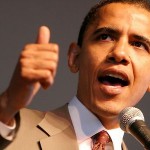 If you were successful, somebody along the line gave you some help.  There was a great teacher somewhere in your life.  Somebody helped to create this unbelievable American system that we have that allowed you to thrive.  Somebody invested in roads and bridges.  If you’ve got a business. you didn’t build that.  Somebody else made that happen.  The Internet didn’t get invented on its own.  Government research created the Internet so that all the companies could make money off the Internet.

The point is, is that when we succeed, we succeed because of our individual initiative, but also because we do things together.  There are some things, just like fighting fires, we don’t do on our own.  I mean, imagine if everybody had their own fire service.  That would be a hard way to organize fighting fires.

So we say to ourselves, ever since the founding of this country, you know what, there are some things we do better together.  That’s how we funded the GI Bill.  That’s how we created the middle class.  That’s how we built the Golden Gate Bridge or the Hoover Dam.  That’s how we invented the Internet.  That’s how we sent a man to the moon.  We rise or fall together as one nation and as one people, and that’s the reason I’m running for President — because I still believe in that idea.  You’re not on your own, we’re in this together.”

via Did Obama Say “If You’ve Got a Business, You Didn’t Build That?” – ABC News.

My immediate reactions, in no particular order:

A new report from the federal Centers for Disease Control and Prevention (CDC) National Center for Health Statistics shows that over a 10-year period, the use of antidepressants has skyrocketed across the United States by a staggering 400 percent — as the numbers of those diagnosed with Major Depressive Disorder (the clinical name for depression) and anxiety disorders has dramatically increased.

With the development of Prozac and similar drugs, more than one out of every 10 Americans over the age of 12 now takes an antidepressant, according to the findings. Researchers analyzed data collected from 12,637 people who participated in the center’s National Health and Nutrition Examination Surveys, which elicit information from about 5,000 Americans of all ages every year. Antidepressants were the third most common prescription drug taken by Americans of all ages in 2005–2008 and the most frequently used by persons aged 18–44 years. The nearly quadruple rate of antidepressant use was from 1988–1994 through 2005–2008.

Read the rest: CDC: Antidepressant Use Up 400% in Past Decade.

Part of the reason is that the people who have the power to affect the content of the DSM are themselves in a profitable relationship with Big Pharma. For more, see this documentary, Generation RX.

For those on the left, like Rep. Weiner, it’s easier to disregard their potential sexual missteps as a character flaw limited to the home life. In his career as a lawmaker, he has been an emphatic advocate for women. (NARAL gave him a 100 percent rating.)

via In defense of sex scandal double standards..

Bizarre. Does Dweck not even consider who a philanderer is really “advocating” by promoting abortion? He doesn’t hold to NARAL despite his character. Quite the opposite.

Sen. Rand Paul has single-handedly stopped the extension of three key provisions of the Patriot Act until after they expire at midnight Thursday. Unless he folds.

Looks like the Southern bubba is going to do it while the cool and sophisticated Harvard-educated community organizer just amasses power.

“He’s fighting for an amendment to protect the right – not of average citizens, but of terrorists – to cover up their gun. It he thinks that it’s going to be a badge of courage on his side to have held this up for a few hours, he’s made a mistake.”

via Obama Dems Don’t Listen to Clinton on Debt – FoxNews.com.

I’m really curious if any blue-staters are allowing themselves to contemplate the present turn of events… and whether or not they might have been completely predictable.

How can we “win the future,” as President Barack Obama exhorted us to do in his 2011 State of the Union address, when our top elected official remains so drearily stuck in the past? And despite the commanding role of what can only be called Sputnik nostalgia in his speech, Obama was not even channeling the distant past in his remarks.

Instead, he served up the equivalent of a microwaved reheating of the sentiments of his immediate predecessor, George W. Bush. That’s some sort of groovy, space-age technological feat, for sure, but we shouldn’t confuse left-over platitudes about cutting wasteful spending on the one hand while ramping up publicly funded “investment” on the other for a healthy meal.

With an unacknowledged debt to the long-running reality show Survivor (“Outwit, Outplay, Outlast”), Obama insisted that we must “out-innovate, out-educate, and out-build the rest of the world.” Which is to say, he sounded exactly like Bush 43, albeit with more open references to China and endless plugs for high-speed rail.

via We Can’t Win the Future By Repeating the Past – Reason Magazine.

The fate of whistle-blowers and tellers of dangerous truth is rarely rock-star celebrity. Count them. Mordechai Vanunu, who exposed Israel’s nuclear program – imprisoned for nearly 20 years. Gary Webb, who exposed the CIA connection to the distribution of crack cocaine in the US – probably murdered. Russian journalist, Anna Politkovskaya, who criticized Putin’s policies in Chechnya – assassinated. Lebanese journalists Samir Qassir and Gebran Tueni, who criticized the Syrian government – killed in car bombings. In 90% of such cases, says the Committee to Protect Journalists, the killers are never brought to justice. Yet, Assange, “the most dangerous man in Cyberspace,” according to the faux-alternative magazine Rolling Stone, lives to tell the tale of his persecution from the cover of Time magazine and the podium of TED conferences, weighted down with awards and honors from such establishment worthies as Economist, New Statesman, and Amnesty International.

And now he is the center of an international man-hunt. Here too, the claims are bizarre. If Wikileaks hasn’t put lives at risk or seriously damaged “national security,” by even the government’s own account, what to make of all these feverish cries for prosecution under the espionage act, for imprisonment and torture, even for execution? Are they for real, or does any one else detect an element of theater? The Wikileaks disclosures have been called cyber-terrorism by many. When before have we seen an international man-hunt for a rag-tag band of terrorists headed up by a charismatic mystery man with a striking appearance and a personal life shrouded in mystery? Now we have Osama-bin-Assange and Al-Wikileaks at war with Joe Lieberman and Sarah Palin, on one hand, and cheered on by David Frum, on the other. Notice that Frum points out that the disclosures actually support George Bush’s rationale for invading Iraq.

This is box-office gold. As some wide-awake journalist has noted, the big winner in all this is the establishment media. Before, it had one foot in the grave. Deservedly. Now it is a “truth-teller.” Readership is up, resurrected by proxy. And the major alternative press, the foundation activists, are bolstering the conclusions of the New York Times. How convenient.

I dearly wish Julian Assange were exactly as he seems – a brilliant iconoclast delivering the death blow to imperialism. But my memory is not so dim. I remember another media circus besides the one around Osama. I recall the mass adulation of a man who exuded brilliance, youth, hope, and salvation. That was in 2008, and he was a young law professor from Chicago. How did that turn out?

via The Case Against Wikileaks – I : Veterans Today.

You aren’t compelled to loan your car to anyone who wants it, but you are compelled to surrender your school-age child to strangers who process children for a livelihood, even though one in every nine schoolchildren is terrified of physical harm happening to them in school, terrified with good cause; about thirty-three are murdered there every year. Your great-great-grandmother didn’t have to surrender her children. What happened?

If I demanded you give up your television to an anonymous, itinerant repairman who needed work you’d think I was crazy; if I came with a policeman who forced you to pay that repairman even after he broke your set, you would be outraged. Why are you so docile when you give up your child to a government agent called a schoolteacher?

via Bianca, You Animal, Shut Up!, by John Taylor Gatto.

Meanwhile, in California: Bill That Could Jail Parents of Truants Passes State Senate

The Baltimore Sun reports that education officials have uncovered rampant cheating at George Washington Elementary School. According to the Sun, school administrators may have cheated their way to better test scores, helping them win the prestigious Blue Ribbon Award, reserved for the top schools in the nation.

Officials discovered that wrong answers on the tests were erased and the right ones filled in.

At the center of the scandal is 60-year-old Susan Burgess. WJZ spoke to the principal in 2007 when the school received the designation.

“The misconception is that the city schools are not meeting the needs of the children and are failing and that’s not true at all,” said Burgess.

At the time Burgess was hailed as an educational hero, turning one of the poorest schools in the city into one of the most successful.

Web postings claim a Stockton sandwich shop refused to serve Marines at lunch on Monday, and the talk has led to a boycott of the eatery.

Calls for the boycott were posted on Facebook pages for the Department of Defense and other sites across the Web.

Posters claim that that Marine recruiters in Stockton were refused service at this Charley’s Grilled Subs in Weberstown Mall.

Franchise store owner Jian Ortman said she’s scared. Phone calls have been coming in nonstop from across the country, some with threats.

This is directly related to the Rand Paul panic. Do we require a new law to protect servicemen from discrimination? Or can we let society handle it? (Assuming the story is true and the incident happened.)