So what to make of Putin?

He is Tolkien’s melodious and fatherly Saruman come alive.

Hanson is not wrong about Tolkien’s fictional character, but I had forgotten that aspect of Saruman–his “melodious” persuasiveness. Frankly, I don’t think Putin is charismatic enough to qualify.

When I think of Saruman, what first comes to mind is Saruman and his orcs. He used them and bred them to wage his wars.

I’ve been thinking of Saruman a great deal lately because his strategy of conquest seems so familiar to what I see, not in Putin, but in US policy. We flooded Libya with orcs and bombed their enemies. They  murdered many sub-Saharan Africans and flew black flags over the conquered towns. Later, at a time when they escaped Saruman’s grip, they killed our ambassador and others in Benghazi.

Now we are using them to overrun Syria so they can rape Christians and burn down churches and overthrow a secular dictatorship in order to replace it with an Islamist nightmare.

As far as the “melodious” aspect of Saruman is concerned, that would be the pseudo-conservative writers and speakers who are doing all they can to prevent an anti-war, anti-establishment movement from growing and to turn it into a partisan anti-Democrat-Party, pro-GOP movement that will froth at the mouth when the next Republican President attacks another nation. 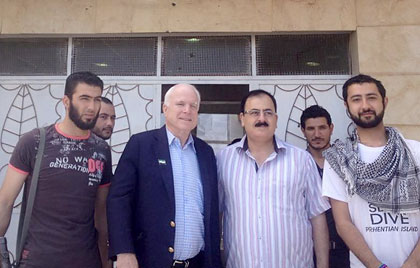