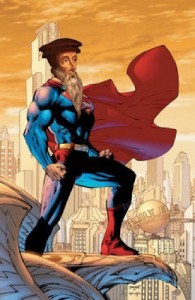 Similarly, although the PCA issued a fevered condemnation of Federal-Vision theology at the national level, she hasn’t been able to find any local individual who holds to what she condemned. Men tried for Federal-Vision leanings are always exonerated.

In this post, on a different topic, a denomination (The Presbyterian Church in America) that makes a general statement about an alleged movement is compared to WalMart having a national return policy that individual stores won’t uphold.

The analogy is breathtaking. Rather than criticize it, I will simply point out a couple of other analogies that are more apt.

One is the child-abuse hysteria of the nineties where we would see huge media stories about satanic covens, ritual abuse, and all sort of other even weirder allegations. Then when it came time to prosecute in a court of law, it was all revealed to be a tissue of insane falsehoods. Naturally, the prosecutors never backed down even after being humiliated, and kept braying about he guilt of the people whose lives had been ruined by their own gossip production.

But there is another element. It is really like a law that bans violence against homosexuals where the law is vague enough that, if they can get the jury to cooperate, it will actually be possible to prosecute people not for real violence, but rather for Christian ministers preaching against homosexuality from their pulpits on the basis of the Bible. Then, when the juries refuse to convict these ministers, the prosecutors loudly complain about lawless judges and/or juries who refuse to uphold the law.

The fact is the PCA acknowledges on Bible and one group of doctrinal standards (Westminster Confession of Faith and Catechisms). When a man is tried by a presbytery it is according to Scripture and the secondary standards. There is a process for reforming those standards, but it can’t be done by one General Assembly voting to approve one study committee (even if that study committee hadn’t been stacked to get the “right verdict” beforehand). So when it comes to trial, you actually have to prove a case. The GA can’t send out a drone to assassinate your target for you.