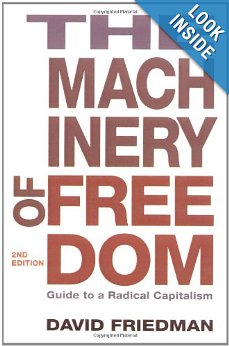 David Friedman’s The Machinery of Freedom (buy / epub / pdf / audio) is probably one of my favorite books defending the market and suggesting how it might be superior to deliver products that we currently depend on government to provide. Usual caveat. Friedman is a libertarian and I am not. But the book is still great.

One of the wonderful things it does is show us that the US welfare state generally redistributes wealth from the rich to the poor is an illusion. What follows is from chapter, “Robin Hood Sells Out.”

Suppose that one hundred years ago someone tried to persuade me that democratic institutions could be used to transfer money from the bulk of the population to the poor. I could have made the following reply: ‘The poor, whom you wish to help, are many times outnumbered by the rest of the population, from whom you intend to take the money to help them. If the non-poor are not generous enough to give money to the poor voluntarily through private charity, what makes you think they will be such fools as to vote to force themselves to give it?’

That would have been a crushing argument one hundred years ago. Today it is not. Why? Because people today believe that our present society is a living refutation of the argument, that our government is, and has been for many years, transferring considerable amounts of money from the not-poor to the poor.

This is an illusion. There are some government programs that give money to the poor — Aid to Families With Dependent Children, for instance. But such programs are vastly outweighed by those having the opposite effect — programs that injure the poor for the benefit of the not-poor. Almost surely, the poor would be better off if both the benefits that they now receive and the taxes, direct and indirect, that they now pay were abolished. Let us consider some examples.

Social Security is by all odds the largest welfare-type program in America; its annual payments are about four times those of all other welfare programs combined. It is financed by a regressive tax — about 10 percent on all income up to $7,800, nothing thereafter. Those who have incomes of less than $7,800, and consequently pay a lower amount per year, later receive lower payments, but the reduction in benefits is less than proportional. If the schedule of taxes and payments were the only relevant consideration, Social Security would redistribute slightly from higher-income to lower-income people.

But two additional factors almost certainly reverse the effect. Most Social Security payments take the form of an annuity — a certain amount per year, starting at a specified age (usually 65) and continuing until death. The total amount an individual receives depends on how long he lives beyond age sixty-five. A man who lives to age 71 receives 20 percent more, all other factors being equal, than a man who lives to age seventy. Further, the amount an individual pays for Social Security depends not only on how much he pays in taxes each year but on how many years he pays. A man who starts work at age 24 will pay Social Security taxes for 41 years; one who starts work at age 18 will pay for 47 years. The first, other factors being equal, will pay about 15 percent less than the second for

the same benefits. The missed payments come at the beginning of his career; since early payments have more time to accumulate interest than later ones, the effective saving is even greater.

People with higher incomes have a longer life expectancy. The children of the middle and upper classes start work later, often substantially later, than the children of the lower classes. Both these facts tend to make Social Security a much better deal for the not-poor than for the poor. As far as I know, nobody has ever done a careful actuarial analysis of all such effects; thus one can only make approximate estimates.

Compare someone who goes to school for two years after graduating from college and lives to age 72 with someone who starts work at age 18 and dies at age 70. Adding the one-third savings on payments to the 30 percent gain in receipts (here the interest effect works in the opposite direction, since the extra payments for the longer life come at the end), I estimate that the first individual gets, from these effects, about twice as much for his money as the second. I do not know of any effects in the opposite direction large enough to cancel this.

Social Security is by no means the only large government program that takes from the poor to give to the not-poor. A second example is the farm program. Since it consists largely of government actions to hold up the price of crops, it is paid for partly by taxes and partly by higher food prices. Many years ago, when I did calculations on part of the Agriculture Department’s activities, I estimated, using Agriculture Department figures, that higher food prices then made up about two-thirds of the total cost of the part of the farm program I was studying. Higher food prices have the effect of a regressive tax, since poorer people spend a larger proportion of their income on food.

Higher prices benefit farmers in proportion to how much they sell; the large farmer gets a proportionately higher benefit than the small one. In addition, the large farmer can better afford the legal costs of getting the maximum benefit from other parts of the program. Notoriously, every year, a considerable number of farms or ‘farm corporations’ receive more than $100,000 apiece and a few receive more than $1 million in benefits from a program supposedly set up to help poor farmers.

So the farm program consists of a slightly progressive benefit (one which benefits those with higher incomes somewhat more than proportionately to those incomes) financed by a regressive tax (one which taxes those with higher incomes somewhat less than proportionately to those incomes). Presumably it has the net effect of transferring money from the more poor to the less poor—a curious way of helping the poor. Here again, I know of no precise calculations that have measured the overall effect.

One could list similar programs for many pages. State universities, for instance, subsidize the schooling of the upper classes with money much of which comes from relatively poor taxpayers. Urban renewal uses the power of the government to prevent slums from spreading, a process sometimes referred to as ‘preventing urban blight’. For middle-class people on the border of low-income areas, this is valuable protection. But ‘urban blight’ is precisely the process by which more housing becomes available to low-income people. The supporters of urban renewal claim that they are improving the housing of the poor. In the Hyde Park area of Chicago, where I have lived much of my life, they tore down old, low-rental apartment houses and replaced them with $30,000 and $40,000 town houses. A great improvement, for those poor with $30,000. And this is the rule, not the exception, as was shown years ago by Martin Anderson in The Federal Bulldozer.

This is not to deny that poor people get some benefit from some government programs. Everyone gets some benefit from some government programs. The political system is itself a sort of marketplace. Anyone with something to bid — votes, money, labor — can get a special favor, but the favor comes at the expense of someone else. Elsewhere I argue that, on net, very nearly everyone loses. Whether that is the case for everyone or not, it surely is the case for the poor, who bring less to the bidding than anyone else.

One cannot simply say, ‘Let government help the poor.’ ‘Reform the income tax so that rich people really pay’ Things are as they are for reasons. It would make as much sense for the defender of the free market to argue that when he sets up his free market it will produce equal wages for everyone.

All of the numbers in this chapter, including the description of the Society Security tax, refer to about 1970; both the tax rate and the maximum income subject to tax have increased substantially since then.