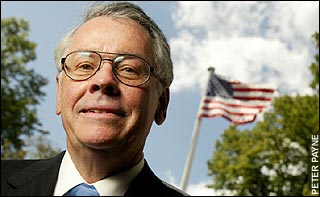 The American ambassador to London has been forced to retract his categorical denial that the US had sent any terrorism suspects to Syria, a country that routinely practises torture.

It was the second embarrassment for Robert Tuttle, a millionaire car dealer and art collector, who last month vehemently denied that US forces had used white phosphorus as a weapon – only to be contradicted by the Pentagon a day later.

Mr Tuttle’s latest mishap came during a radio interview in which he defended America’s controversial policy of “extraordinary rendition” – secret operations to capture and move terrorist suspects to US custody.

It is alleged that America has secret prisons in eastern Europe.

Asked about suspects being “dumped” in Syria, Mr Tuttle told Radio 4’s Today programme: “I don’t think there is any evidence that there have been any renditions carried out in the country of Syria. There is no evidence of that. I think we have to take what the Secretary [Condoleezza Rice] says at face value.

“It is something very important. It is done very carefully and she has said we do not authorise, condone torture in any way, shape or form.”

The interview was recorded last Thursday and broadcast yesterday. But on Friday the US embassy sent a clarification that was broadcast at the end of the interview.

The statement said: “The ambassador recognised that there had been a media report of a rendition to Syria but reiterated that the United States is not in a position to comment on specific allegations of intelligence activities that appear in the press.”

via US ambassador corrects slip-up over sending suspects to Syria – Telegraph.

Another point: If only Assad were as civilized as us and used white phosphorous instead of (pick one: saran gas/chlorine ?).