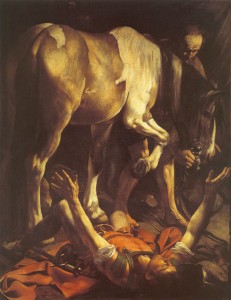 So I am eager to preach the gospel to you also who are in Rome.
For I am not ashamed of the gospel, for it is the power of God for salvation to everyone who believes, to the Jew first and also to the Greek. For in it the righteousness of God is revealed from faith for faith, as it is written, “The righteous shall live by faith.”
For the wrath of God is revealed from heaven against all ungodliness and unrighteousness of men, who by their unrighteousness suppress the truth (Romans 1:15-18 ESV).

The typical interpretation, I think, is that the Gospel reveals God’s righteousness, and is the solution to God’s wrath which is revealed somehow “from heaven.” The idea is that God’s wrath is God’s actions of turning people over to further sin because they sin, as is vividly described in Romans 1.18ff.

God does indeed give people up to sin, and is just in so doing. But that process described beginning in Romans 1.18 is not the fullness of God’s wrath. Paul clearly states that this whole process, rather than satisfying God’s wrath, actually requires his patience and kindness. He writes at the climax:

And yet death has not overtaken all human history. God has not sent a worldwide flood. God has not consumed the world by fire. Why not?

Then in the next chapter it is stated more clearly that God’s mercy is involved in all of this:

We know that the judgment of God rightly falls on those who practice such things. Do you suppose, O man—you who judge those who practice such things and yet do them yourself—that you will escape the judgment of God? Or do you presume on the riches of his kindness and forbearance and patience, not knowing that God’s kindness is meant to lead you to repentance? But because of your hard and impenitent heart you are storing up wrath for yourself on the day of wrath when God’s righteous judgment will be revealed
(Romans 2:2-5 ESV).

This plainly tells us that this whole process, where God gives up sinners to more sin, was not a simply an exercise of God’s justice, but involves a work of grace. Furthermore, the “day of wrath” is not an ongoing aspect of this history, but a future date.

This raises the question: Is Romans 1.18 telling us that God’s wrath is revealed in the Gospel because the Gospel tells us about this future day of wrath?

As Paul writes a little further on:

They show that the work of the law is written on their hearts, while their conscience also bears witness, and their conflicting thoughts accuse or even excuse them on that day when, according to my gospel, God judges the secrets of men by Christ Jesus (Romans 2:15-16 ESV).

If the Gospel reveals God’s wrath, we might understand Romans 1.16-18 as follows:

I think this is right, but I don’t think the fact that the Gospel foretells the day of judgment is what Paul is referring to when he says that the Gospel reveals the wrath of God.

How does the Gospel reveal both the righteousness of God and the wrath of God?

The answer, of course, is spelled out in Romans 3.21ff. God displays both his faithfulness or righteousness and his wrath by publicly subjecting Jesus to His wrath.

But now the righteousness of God has been manifested apart from the law, although the Law and the Prophets bear witness to it—the righteousness of God through the faithfulness of Jesus Christ for all who trust. For there is no distinction: for all have sinned and fall short of the glory of God, and are justified by his grace as a gift, through the redemption that is in Christ Jesus, whom God put forward as a propitiation by his blood, through [his] faithfulness. This was to show God’s righteousness, because in his divine forbearance he had passed over former sins. It was to show his righteousness at the present time, so that he might be just and the justifier of the one who belongs to the faithfulness of Jesus (Romans 3:21-26).

First, notice that once again we see that God’s wrath was not revealed in the process described beginning in Romans 1.18ff. Paul reiterates that God had “passed over former sins.”

But by putting Jesus forward as a propitiation, God has revealed his righteousness and faithfulness. He revealed his wrath on Jesus.

The righteousness of God is revealed in the Gospel because the Gospel reveals the wrath of God by preaching the cross of Christ.

There is therefore now no condemnation for those who are in Christ Jesus. For the law of the Spirit of life has set you free in Christ Jesus from the law of sin and death. For God has done what the law, weakened by the flesh, could not do. By sending his own Son in the likeness of sinful flesh and for sin, he condemned sin in the flesh
(Romans 8:1-3 ESV)

You will say to me then, “Why does he still find fault? For who can resist his will?” But who are you, O man, to answer back to God? Will what is molded say to its molder, “Why have you made me like this?” Has the potter no right over the clay, to make out of the same lump one vessel for honorable use and another for dishonorable use? What if God, desiring to show his wrath and to make known his power, has endured with much patience vessels of wrath prepared for destruction, in order to make known the riches of his glory for vessels of mercy, which he has prepared beforehand for glory—even us whom he has called, not from the Jews only but also from the Gentiles? (Romans 9:19-24 ESV)

Note that, in that last passage above, Paul is not claiming that all the unbelieving Jews are beyond the possibility of redemption. There is still time to repent. He goes on to say that only a “partial hardening has come upon Israel” (Romans 11.25). The wrath here is not the eternal wrath on unbelieving sinners at and after the day of Judgment. Rather, it is the wrath displayed on the cross. Israel’s hardening brought salvation to Jew and Gentile alike.

For just as you were at one time disobedient to God but now have received mercy because of their disobedience, so they too have now been disobedient in order that by the mercy shown to you they also may now receive mercy. For God has consigned all to disobedience, that he may have mercy on all.
Oh, the depth of the riches and wisdom and knowledge of God! How unsearchable are his judgments and how inscrutable his ways!
“For who has known the mind of the Lord,
or who has been his counselor?”
“Or who has given a gift to him
that he might be repaid?”
(Romans 11:30-35 ESV)