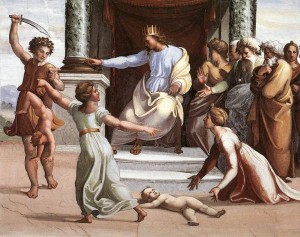 Credentials to speak on the subject:

But it involved driving a truck at about forty minutes at a time. And it had a CD player.

Using CD burning tech on my computer, I went into the truck with Proverbs 10, then 11, and 12. I memorized all three chapters so I could say it all in order from start to finish.

I haven’t retained a lot of it. I need to get it loaded on an iPod and spend some time practicing, again, or else start getting disciplined about flash cards or something. If you don’t use it you lose it.

But for awhile I had it and did use it, and these are some of the things I can say from that experience.

1. Proverbs is God’s Catechism; it is meant to be memorized

OK, This is more the reason I began memorizing Proverbs than something I learned… except I can say I am more convinced that Proverbs was meant for this now, than when I started.

Think of the things that we consider to be ideal catechisms for the Church. I don’t doubt that teaching Christian doctrine, and even giving exact words for Christians to use, is a good idea. But we have to admit that God could have had Paul or someone write such a thing. Instead he had Solomon and others give us Proverbs.

2. God tells us to teach our children “when you are going out.”

So here’s the thing. I can’t grab a pocket Bible, or my Kindle, and look up a verse while I am driving. But I have a captive audience and memorizing Proverbs gave me a chance to exploit the situation.

Many times I hid what I was doing. I’d throw one of the kids a Bible and say, “Can you see how I’m doing?” and let them read and make sure I was reciting everything word-perfect…. and often that worked. (Note: in my experience, the younger you start this, the more productive it will be.)

But if you want a chance to discuss with your teen sons the basic alternative between plunder and production, and the habits that are demanded by making the right choice, Solomon will provide plenty of help.

In any case, my 8-year-old got credit for her school’s public speaking competition for reciting Proverbs 10.1-8. (She would have done more, except for the time limit.) One other advantage about memorizing the Proverbs is that, not only can you repeat them to your children, and talk about them, but you can also be their means of memorizing them for themselves.

3. The only way to map some mazes is to meander through them.

There are many books in the Bible in which a scholar is able to know the general story and look at the text on the page and pick out details that help him make an outline or see and order that wasn’t obvious at first.

In most respects, Proverbs is not one of those books. It seems jumbled, too repetitive, and at times given to insultingly-obvious tautologies. You have a hard time convincing yourself that someone was grabbing from a pile of notes and writing sayings down randomly.

But when you start to actually memorize, the “shape” of Proverbs seems a lot more coherent. I would never have seen this chiasm if I hadn’t been memorizing, to name a small example.

(In fact, the majority of what I wrote in this category comes from the time I was memorizing Proverbs.)

I’m not sure how to demonstrate or explain what I want to say here, so I’ll resort to an analogy. Most times you get directions you don’t have to keep track of that much. You learn to look for a couple of intersections and which way you should turn; that is all you need.

Proverbs is more like a thick forest. There doesn’t seem to be any trail through it. But once you actually start exploring, you begin to pick out landmarks. It becomes familiar. Even though you couldn’t give directions or draw a map that would work with a novice, you find you could easily lead them through it.

One way this pays off is with reading the portions of Proverbs I had not yet memorized. It became easier to comprehend. I wasn’t haunted by the vague sense that I had read that same sentence somewhere else in the book; I knew exactly where I had run into it. The entire book began to seem more familiar even though I had only “taken possession” of three chapters.

4. Your “New Testament” will suddenly double in size.

The Gospels and Letters to the Church after Christ are filled with appeals/allusions to the Proverbs. It is amazing. Without Proverbs I’m not sure what ethics would be left. You feel like every single book in the “New Testament” doubles as a commentary on Solomon.