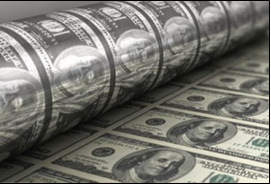 Debasing currency is a form of fraud. God doesn’t like it. It makes things that are worth something lose their value. But, for a while, it goes undetected so that the first spender gets to defraud the first buyer.

In a fiat currency system it is hard to understand how mere paper can be debased. But when more money is printed it has the same effect. The new money is spent by the government and the people closest to the Federal Reserve system before most of the rest of the economic actors have realized that there is more money available.

So if you are selling pies in Flyover Country somewhere, and suddenly notice that more people are buying your pies, you think that you are becoming successful. Consumers preferences have shifted and they now like your pies more than they used to.

Of course, you have to raise the prices on your pies or else you would run out.

But you also realize you could hire another baker and produce more pies for more people at a slightly lower cost and so come out ahead of where you used to be while providing for more happy consumers.

It all seems great until you start noticing that everyone else’s prices are rising. You aren’t actually making more profit. The dollars and cents are just worth less. You were fooled. Your prices are going to have to stay high so you can pay your employers more and keep buying the more expensive supplies. You can’t afford another kitchen worker.

So that is the basic outline of how paper money or fiat currency works.

In that temporary moment when military contractors and bankers have new money they get to spend it on new things, and by the time the prices go up it hits the lower and middle and working classes as they see their cost of living rise.

But there are a couple of other factors to keep in mind.

If our banker overlord Ben Bernanke decided to print off a trillion dollars, not tell anyone, hide it in a vault somewhere, and then burn it ten years later, there would effectively be zero price disruption. In order to be “money” it has to reach some level of circulation.

On the other hand, people (if they aren’t stupid) normally try to hold cash reserves (this is rare now with zero interest rates and the fraud that “net worth” is more important than cash on hand having trained us to spend and borrow rather than save). Our overlords have decided in many cases to see cash reserves as “deflationary” and try to discourage them in favor of immediate consumption to “keep the economy going.” But cash reserves are something that, normally, consumers value as a safety net–as a market good. Companies want that safety as well and view it as a means of keeping the company going. So, to say that money in cash reserves is not “circulating” is a superficial observation. It is money used to meet a real demand.

This complicates the issues of monetary inflation and deflation related to price levels. If everyone prefers doubling their cash reserves to buying new cars, that will show up in most economic charts as price deflation. But it is not. It just means consumers are making choices about what to do with circulating money.

Now, I think sometimes printing money can lead to deflation. How does that happen? Hopefully you see now that the process of bringing new money into circulation is not simply a matter of printing it. It also has to be used. The bankers and military contractors are all partners in the inflation process.

And that process dramatically elevated since 2001.

The Federal Reserve kept lowering and lowering interest rates. This discouraged savings, encouraged stock market speculation as an alternative to saving (aka “investing”), and caused inflation. Under the system of Fractional Reserve Banking, all the debt was converted into leverage for more money. People took out mortgages that were converted into “investments” that were then used as collateral for more debt and spending.

Then the housing collapse started.

It never finished. The government has done everything it can think of to stop the decline in the housing market and then “stimulate” the economy by negative interest rates and bailouts and new money.”

So we started to hear about “quantitative easing” as the term of choice for new money printing.

At this point, people are sitting in houses in which they owe more than the house is now worth because of the price collapse. Banks are holding these mortgages as “assets” when they are in reality black holes of liability. They can only hope somehow the home “owners” will keep paying money and they won’t have to acknowledge these holdings as losses. Our banker overlord at the Federal Reserve thinks that printing new money will restart the housing bubble.

So the new money comes into circulation. What happens?

Banks, knowing that they are really bankrupt, use it as cash holdings! This is a real form of inflation since it keeps a bunch of useless financial corporations afloat that should be closed down so that the economy can heal. They are perpetual sores on the economy that we are told we must embrace. But that inflation isn’t perceived as the kind of inflation that people want. It doesn’t start a new bubble that allows us the illusion of thinking our net worth is increasing.

But not all the money goes into this cul-de-sac. Other money gets into the economy in food prices and energy prices. Suddenly the price of gas goes up.

And this is where the deflation might hit. Because all these people now massively underemployed are sitting in houses they can barely afford to keep. Rising energy costs and food costs are exactly what will “stimulate” more defaults and force more foreclosures. At that point, the new money that raised household expenses will further destroy the money dependent on housing values. Housing will plummet further and the net result will be further price deflation even if we are paying more at the pump.

Remember, prices vary comparatively all the time. Price deflation is when all prices taken together in an average are lower. It doesn’t mean every single price of a good on the market is lower.