Now the birth of Jesus Christ was as follows: when His mother Mary had been betrothed to Joseph, before they came together she was found to be with child by the Holy Spirit.  And Joseph her husband, being a righteous man and not wanting to disgrace her, planned to send her away secretly.  But when he had considered this, behold, an angel of the Lord appeared to him in a dream, saying, “Joseph, son of David, do not be afraid to take Mary as your wife; for the Child who has been conceived in her is of the Holy Spirit.  She will bear a Son; and you shall call His name Jesus, for He will save His people from their sins.” 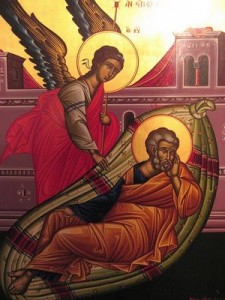 via Matthew 1 NASB – The Genealogy of Jesus the Messiah – Bible Gateway.

Many people try to make something of Jesus going “beyond” the OT Law in the Sermon on the Mount. I’ve never found this convincing. At this point I’m of the opinion that Jesus was teaching the true meaning of the Law over against the false teachings of human traditions that were current in Israel among his contemporaries.

But here it really looks different. I remember at one time thinking that Joseph must have heard Mary’s story, decided she was mentally unhinges, and thus not deserving to the death penalty. But notice that nothing is said about the possibility of death. Perhaps that was unenforceable under Roman occupation and was not even considered. But, in any case, Joseph didn’t want to spare just her life. He wanted to spare her even any disgrace.

And why? Because he was merciful?

That’s not the word the Bible uses. He wanted to do her good in her seeming unfaithfulness because he was righteous or (as it could also be translated) just.

This makes me think of a couple of things, one relevant to the way we talk in Evangelical circles and the other about how Evangelicals seem to think about political influence.

First, is it not entirely perverse to think of the righteousness of God as a source of fear and liability rather than the only hope any sinner could possibly have? Does God forgive us despite being righteous? No!

If we confess our sins, He is faithful and righteous/just to forgive us our sins and to cleanse us from all unrighteousness/injustice (First John 1.9)

For more, see my five-part series on the Righteousness of God and other stuff under that label. Honestly, the way that Evangelicals typically talk about their relationship to God’s righteousness often seems perverse to me in comparison to many of the Psalms and other passages. I’m not saying there is not a grain in truth to it, but as a form of discourse it makes us speak a different language from most of Scripture most of the time. More importantly, it opposes us to God’s own character.

Secondly, while I thought this idea had been discredited for most people, I’m finding that in some quarters the concept of Christian influence in society is almost as crude as this: figure out what is good and then use laws to force everyone to do it.

If you think I’m exaggerating I hope you are right. But in case it might be helpful, let me point out that Joseph was perfectly free to publicly disgrace Mary according to the law of God. Nothing external or public forced him to do the right thing. While God’s law doesn’t sit well with modern people (and needs to be upheld and defended in such cases) not even God micro-manages.