As anyone who has ever read The Lord of the Rings knows, reading Tolkien’s masterpiece requires a huge time commitment, one that is, of course, well-rewarded.  Horne’s biography, on the other hand can be zipped through in an evening or two, yet I believe it will greatly enhance the reader’s enjoyment of Tolkien’s works.  I highly recommend this book.

… since I did write a book about him and all!

Off the top of my head, I wonder why she didn’t include the Kalevala.

This was a pleasurable biography well written and extensive in its scope. It is easy to read and draws parallels between emotional and historical happenings that impacted Tolkien which then shaped how he wrote and what he chose to write about. I love these peeks into an author’s life that give you the “Aha” moment of understanding.

His early loss of his father, his later loss of his mother and his relationship with Edith, his wife, are thoughtfully explored and covered. The impact of deep and rich relationships with C.S. Lewis and many other men illustrate his care and concern for others. Mr. Horne has used extensive materials in the writing of this biography and it is wonderfully written. In the appendix he lists five other resources for further study that he found very informative and enjoyable.

As a home school mom, I appreciated the fact that his own mother had home schooled him for a period of time. I think these stories are a great length for the high school student to use for essay writing and would be a good complement to any English curriculum.

If you pressed me to think about it, I would probably say my all-time favorite fiction author is J.R.R. Tolkien. Last year I read a biography in the Christian Encounters series about Winston Churchill. In the last pages of the book were some “coming soon” advertisements. One was for J.R.R. Tolkien, and I was SOOO excited. I hoped I would have the chance to review it, but I didn’t hold my breath. Recently it popped up on booksneeze as an e-book. It was the opportunity I had hoped for!

Mark Horne compiled many different sources to bring a fresh, new biography about Tolkien which explores his life events and how they shaped his writings.

Tolkien is probably best known as the author of the Lord of the Rings. He wrote that book later in his life, after writing The Hobbit, yet he laid a foundation for Middle Earth many years before either book came to be. In Horne’s biography about Tolkien I discovered many things that fascinated me. Tolkien was a linguist. He was fluent in several languages and preferred to read works of literature in their original languages. (He developed his own fictional elven language.) The passion he had for linguistics shaped his career path as well. Horne avoids making many assumptions or conclusions about Tolkien. Instead, he presents factual information in a chronological format. He sometimes makes suggestions about possible correlation between the events of his life and his writings, but conclusions are left up to the reader.

It seems hard to remember now that there was a time when the American counterculture embraced J.R.R. Tolkien and his masterpiece. Groovy dudes in pipe-weed jerkins yelling “Go Go Gandalf,” walls covered with graffiti proclaiming “Frodo Lives!”, and election-year “Gandalf for President” buttons were all popular sights on college campuses from Harvard to Berkeley.

I had mentioned this series earlier before Part 4 was posted. I’ll need time to read it more carefully. I frankly think of Howard as more of an anti-Tolkien than not. But it has been awhile since I read him.

Also, I’m not sure I would be quite as negative about Tolkien’s appeal to “hippies.”

Still, it is a post well worth reading and thinking about. 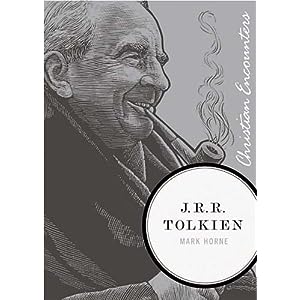 In order to fully understand what I’m about to write, you will need to see the book for more details. More than simply the facts of John Ronald Reuel’s life (and deaths), I found some material about artistic accomplishment and loss in childhood that applies quite specifically to Tolkien.

Let me make the point by outlining a possible time travel story (one of the literary ambitions of Tolkien, by the way, that never materialized: he was to do time travel while Lewis was to do space travel).

Say you are, against your will for reasons you don’t understand, thrown back in time and space to South Africa in 1896 with some brief medical training and supplies. There you meet a man named Arthur, who–you were told–is likely to get rheumatic fever.  You stay with him and manage to prevent this from happening.

Then you are whirled forward a few years in time and a few thousand miles in space to an English home. Arthur is there and tells you he decided to return to make his fortune in England since his wife so prefers it. Their two boys also love the English countryside (perhaps the older one does so especially in contrast to early, vague memories of the South African wilderness). They are a faithful Anglican family, attending a rather middle-church parish. You recognize your next and final assignment in the wife, Mabel. You explain what insulin can do for diabetes and leave her with the training, equipment, and supplies she needs to remain healthy for years (extracting a promise never to reveal her anachonistic technology).

And then you return home and find you cannot recognize the scifi section of your local bookstore. It is all spaceships and ray guns.

The Lord of the Rings was never written.

Now there are jillions of things wrong with this scenario. We could assume the rules of LOST and say that time always tries to spring back into its original shape so that, once you prevent a death, another death comes about soon after, so that Arthur and Mabel still die early.  If Arthur had decided to stay in South Africa (as he seemed to want to do, despite Mabel’s misgivings) then the whole family would have been present for the Boer War. No one knows what might have happened then.

Also, maybe some other great author would have invented fantasy.

On the other hand, I might be under-stating the impact. Perhaps C. S. Lewis would never have been converted. Then there would be no apologetics and no children’s fantasy either.

But getting back to the impact on fantasy literature: frankly, I don’t think we would have Star Wars, Dune, or Harry Potter or many other works. No Ranger’s Apprentice series not least because the term “Ranger” would be restricted to cowboys rather than medieval war scouts.

It is pretty clear that noteworthy, creative people are disproportionately likely to have suffered the loss of one or both parents in childhood. While he could have wandered in many ways (and almost did many times), Tolkien was following a rather well-trod path going from bereavement to fame as an author. (The loss he suffered in the slaughters of World War I probably also count in this regard.)

I argue for all this in the book, I won’t say more here.

But I will ask you this. What if we replay the scenario except you recognize who Arthur is and realize that when you go back, if you save him, it will be a world with a much happier Tolkien and no trilogy.

Do you save him?

Leo Grin at Big Hollywood has a series worth reading about The Lord of the Rings, and why so many people come away from it feeling “nourished and refreshed.” Part 1 is here, part 2 is here, and part 3 is here. (More is said to be coming!)

via Tolkien and ‘ennobling fantasy’.

Don’t have time to read it right now. But it sounds good.

I’ve been prone to consider this Proverb as aimed at exegesis of Scripture. Early in chapter 1 we are told Proverbs will contain the riddles of the wise, so there is some basis for this.

But nothing at all indicates this Proverb is meant to be so limited in scope.

Does your life make no sense?

Maybe your life is a riddle and you are royalty. Maybe you wish it were otherwise, but God is honoring you with glory.

Of course, the only way to “search things out” in such a case is to continue to live your life and not give up hope.

All that is gold does not glitter, and not all glory appears glorious at first. Proverbs is about dealing with trials and gaining from them. If you knew the time limit or the answer that would appear, then it wouldn’t really be a riddle and you would not be the king God is crowning.

In the midst of piles of Lord of the Rings merchandise on every shelf, Tolkien’s wisdom is applied to just about everything — Tolkien and industrialization, Tolkien and communism, Tolkien and religion, etc. What’s surprising, especially in today’s hypersensitive post-Gloria Steinem world, is the dearth of commentary on Tolkien and women.

Read the rest The Women of Middle Earth | Catholic Exchange.

Twilight is a huge seller and one might be tempted to despair.

It is still amazing the number of Tolkien references one finds in Twitter and on Facebook. Tolkien! Not J. K. Rowling. (I would assume she has more references, but she still has movies coming out. Tolkien is still amazingly influential.)

And for all the idiocy of Twilight, I’m sure there are many readers who wanted something better and will continue to look for it.  True, they will be misled by a host of books trying to imitate the worst features, but eventually another Rowling or two will come along.

And Tolkien will continue to be a lighthouse in every scifi/fantasy bookshelf in the world.

There was a time when “Swords and Sorcery” was a real minority report among readers.  It was mostly pulp fiction.  Tolkien changed the world forever by both transforming and popularizing the epic fantasy genre. He and Lewis had insisted people were hungry for it and, while nothing about Tolkien resembled an entrepreneur, he did in fact find a new market.

Gary Gygax has said he was expecting to market D&D to a small group of wargamers. He two broke into a new market, in large part because he had Tolkien to make a way for him.

Yes Twilight has been successful, but it is not going to be here a half-century later. No one is going to vote for Meyers as the author of the century in 2101.

Instead of judging the world by the popularity of Twilight we should look at the enduring popularity of Tolkien and also his better innovators like Rowling.

Just my opinion; but you know what an optimist I am.