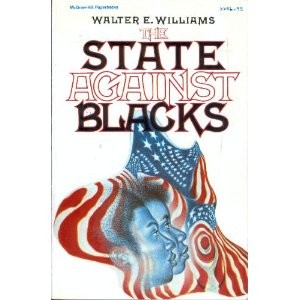 The only reason I didn’t give Walter Williams fine book five stars, when I reviewed it at Amazon.com, is because it is decades-old now. Why doesn’t Williams get his students to do some up-to-date research and come up with an expanded edition?

But the book is excellent beyond measure–easily (apart from datedness) worth six stars out of five. And because it explains really well why the average person of color came from a poorer family in the eighties, one could even argue that it remains quite contemporary. More importantly, the principles articulated here are quite easily applied to a variety of other situations.

The basic thesis (I’m going by memory here) is that even though “Jim Crow” laws have been removed from the state governments, that the federal, state, and local governments have in fact passed laws and (especially!) regulations that disproportionately hurt blacks and promote their poverty rather than their prosperity. One reviewer has already mentioned the taxicab example. At one time, if one had a car, one could offer one’s services as a taxi cab driver. But now the City government has made it illegal for a person to offer that service. Walter Williams discusses the proffered rationales for this use of state violence (Williams’s tone is not nearly as severe as mine, but what can I say?—All laws are statements threatening people with violence who don’t comply). But these rationales for government intervention are easily shown as bogus. The existing cab drivers are lining their pockets with money from all other potential cab drivers. This is a colorblind system of robbery, but it is not economically blind. It hurts those who have a car and can drive but who don’t have other more lucrative opportunities. Due to past injustices that were not color-blind, this injustice ends up not being color-blind either. Because minorities are disproportionately poor, laws exploiting the poor are laws that especially target certain races.

READ THE REST: “The State Against Blacks” by Walter Williams is a book every American needs to read – Kuyperian Commentary.