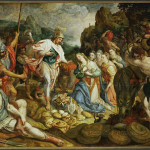 This is one of my favorite Bible stories. It shows David trying to run an honest protection racket as best he can. The pressure must have been immense. Consider who followed David:

I don’t think you want four hundred “bitter of soul” men with swords hungry and angry at you. Later, after the group had grown to six hundred (1 Sam 27.2), they almost decided to stone David to death because of a defeat they suffered under his leadership (1 Sam 30.1-6).

So David upon hearing that a rich farmer/rancher was not going to provide rations for his militia, immediately promised to exterminate him and every male in his company, referring to them by their capacity to urinate standing up. In other words he deliberately reverts to crude soldier talk that depersonalizes the people he plans to murder (Notice the ESV totally euphemizes what David says about the men he promises to kill).

When Abigail saw David, she hurried and got down from the donkey and fell before David on her face and bowed to the ground. She fell at his feet and said, “On me alone, my lord, be the guilt. Please let your servant speak in your ears, and hear the words of your servant. Let not my lord regard this worthless fellow, Nabal, for as his name is, so is he. Nabal is his name, and folly is with him. But I your servant did not see the young men of my lord, whom you sent. Now then, my lord, as the Lord lives, and as your soul lives, because the Lord has restrained you from bloodguilt and from saving with your own hand, now then let your enemies and those who seek to do evil to my lord be as Nabal. And now let this present that your servant has brought to my lord be given to the young men who follow my lord. Please forgive the trespass of your servant. For the Lord will certainly make my lord a sure house, because my lord is fighting the battles of the Lord, and evil shall not be found in you so long as you live. If men rise up to pursue you and to seek your life, the life of my lord shall be bound in the bundle of the living in the care of the Lord your God. And the lives of your enemies he shall sling out as from the hollow of a sling. And when the Lord has done to my lord according to all the good that he has spoken concerning you and has appointed you prince over Israel, my lord shall have no cause of grief or pangs of conscience for having shed blood without cause or for my lord working salvation himself. And when the Lord has dealt well with my lord, then remember your servant.” (1 Samuel 25:23-31, ESV)

David responds in part by frankly admitting that he was intending on committing the sin of homicide. “Blessed be your discretion, and blessed be you, who have kept me this day from bloodguilt and from working salvation with my own hand!” Samuel 25:33, ESV) David doesn’t say his planned reprisal was justified he admits it would have left him guilty of what Abigail claimed: shedding blood “without cause.” He also admits that he, king though he may be, is supposed to allow room for the wrath of God, and allow YHWH to save him, rather than take his own vengeance. He should have trusted God to provide for his men and protect him from their anger.

So, in the past, I have seen this story as one with a happy ending. David turns away from murder and learns to not pillage even when he thinks he is being mistreated by a lack of hospitality. David has to somehow restrain himself from the real temptation of exercising power the way other kings would exercise it. And God vindicates Abigail’s word. God fights for David and kills Nabal once David has renounced his plan to commit his own vengeance.

So all’s well that ends well.

But the story doesn’t end well.

When David heard that Nabal was dead, he said, “Blessed be the Lord who has avenged the insult I received at the hand of Nabal, and has kept back his servant from wrongdoing. The Lord has returned the evil of Nabal on his own head.” Then David sent and spoke to Abigail, to take her as his wife. When the servants of David came to Abigail at Carmel, they said to her, “David has sent us to you to take you to him as his wife.” And she rose and bowed with her face to the ground and said, “Behold, your handmaid is a servant to wash the feet of the servants of my lord.” And Abigail hurried and rose and mounted a donkey, and her five young women attended her. She followed the messengers of David and became his wife.

David also took Ahinoam of Jezreel, and both of them became his wives. Saul had given Michal his daughter, David’s wife, to Palti the son of Laish, who was of Gallim. (1 Samuel 25:39-44, ESV)

The remark about Palti sets us up for one of the more sad scenes from David’s exaltation (2 Samuel 3.12-16). But apart from that, this story ends with David violating God’s commands for kings in Israel:

“When you come to the land that the Lord your God is giving you, and you possess it and dwell in it and then say, ‘I will set a king over me, like all the nations that are around me,’ you may indeed set a king over you whom the Lord your God will choose. One from among your brothers you shall set as king over you. You may not put a foreigner over you, who is not your brother. Only he must not acquire many horses for himself or cause the people to return to Egypt in order to acquire many horses, since the Lord has said to you, ‘You shall never return that way again.’ And he shall not acquire many wives for himself, lest his heart turn away, nor shall he acquire for himself excessive silver and gold. (Deuteronomy 17:14-17, ESV)

David, even in exile, is asserting his authority and kingly status by establishing a polygamous dynasty for himself. To David’s credit, it takes another generation for his precedent to work out to the full blown result in his son Solomon, whose heart is “turned away” by his wives. But it starts here. David thinks he knows what it means to be a king, and he has learned that it means to have several wives (and later concubines as well).

So did David really learn his lesson? I think the story ends with an ominous feeling. And it makes me re-read David’s own confession when he meets with Abigail:

And David said to Abigail, “Blessed be the Lord, the God of Israel, who sent you this day to meet me! Blessed be your discretion, and blessed be you, who have kept me this day from bloodguilt and from working salvation with my own hand! For as surely as the Lord, the God of Israel, lives, who has restrained me from hurting you, unless you had hurried and come to meet me, truly by morning there had not been left to Nabal so much as one male.” (1 Samuel 25:32-34, ESV)

Again, David doesn’t say “male,” but refers to urination methods to identify which sex he was going to kill. Perhaps I’m overly suspicious, but it seems as if David is still posturing for the sake of his men-at-arms. And why spell out what would have happened as an oath before God? (“For surely as the Lord, the God of Israel, lives..”) It makes me wonder if David still wants to re-assure people that he would have done the deed, rather than simply confess to wickedness.

But I can say that the story shows us David being prevented from one sort of self-aggrandizement but seduced by another.

Does this story have a moral for us? I suppose some people think one should never read an OT story moralistically. Here we see that David, as a type of Christ, but still stuck in the corruption of the Old Adam, falls short of the one to Whom he points.

OK fine. But I still think there is a moral.

Politics is an arena fraught with temptation that can be covered easily with self-deception. People can avoid one danger and fall into another. Beware.