What I like about this quote is how Horton explains the City of Man, ruled by Satan, is a rival to the City of God. Properly understood, this makes me wonder about common phrases like “redeeming the culture” or “redeeming the city” which are tossed around in reformed circles. If the City of Man is at war with the City of God and is trying to supplant it, why do we go to such pains to get cozy with the culture? Why do we look for church-planters who are good at contextualizing the Gospel instead of men who understand this tension and antithesis? 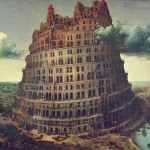 Well, if you don’t think the Reformed tradition is correct in its understanding of Scripture and the Great Commission, then you might wonder about current Reformed slogans. But the fact is that Horton is, IF he were to claim to speak for the whole of the Reformed Tradition, a revisionist. And treating his conclusions as the unquestionable standard for judging the behavior and speech of Reformed churches is to engage in such revisionism.

The Reformed tradition has been both amillennial and postmillennial. Recently, some Reformed thinkers have embraced historical premillennialism. I have no problem with Horton or anyone else picking one side rather than the one I happen to think is true. But worrying about run-of-the-mill Reformed understanding of the Great Commission is not peaceful co-existence.

And, while I respect his Reformed bona fides (and in so doing hopefully set a good example for him and others) I think Horton is wrong, as I read the Great Commission.

And Jesus came and said to them, “All authority in heaven and on earth has been given to me. Go therefore and make disciples of all nations, baptizing them in the name of the Father and of the Son and of the Holy Spirit, teaching them to observe all that I have commanded you. And behold, I am with you always, to the end of the age” (Matthew 28:18-20 ESV).

When is Jesus given all authority in heaven and earth. At the end? “On the last day?” No. We are called by the King to disciple all the nations. The whole reason there is an “antithesis” between God and Man is because they are claiming the same territory at the same time. The new city begins now. Or rather, began then. Jesus is building it up not from invisible ghosts, or in the future, but in living breathing people who dwell here and now on the earth:

As you come to him, a living stone rejected by men but in the sight of God chosen and precious, you yourselves like living stones are being built up as a spiritual house, to be a holy priesthood, to offer spiritual sacrifices acceptable to God through Jesus Christ. For it stands in Scripture:
“Behold, I am laying in Zion a stone,
a cornerstone chosen and precious,
and whoever believes in him will not be put to shame.”
So the honor is for you who believe, but for those who do not believe,
“The stone that the builders rejected
has become the cornerstone,”
and
“A stone of stumbling,
and a rock of offense.”
They stumble because they disobey the word, as they were destined to do.
But you are a chosen race, a royal priesthood, a holy nation, a people for his own possession, that you may proclaim the excellencies of him who called you out of darkness into his marvelous light. Once you were not a people, but now you are God’s people; once you had not received mercy, but now you have received mercy
(1 Peter 2:4-10 ESV).

Yes, we are in one sense exiles from the city of Man, but that city is crumbling now. And we are called to minister in a new one now. Not later. Not at the end. Horton is quoted as saying that all humanity is outside of the Garden blocked from re-entering by the Cherubim. But in Acts 1 the two Cherubim over the Ark of the Covenant are gone. Rather two men now hold that office.

Jesus has been raised. And Humanity has been raised up with him to a far better place than the Garden of Eden. Yes there is more to come, but the path there is not an invisible one that leaves the city of man intact. Rather we are to replace it with the city from above that is our Mother.

For as in Adam all die, so also in Christ shall all be made alive. But each in his own order: Christ the firstfruits, then at his coming those who belong to Christ. Then comes the end, when he delivers the kingdom to God the Father after destroying every rule and every authority and power. For he must reign until he has put all his enemies under his feet. The last enemy to be destroyed is death (1 Corinthians 15:22-26 ESV).

Not one giant battle at the end with every rule and every authority and power. But only one last remaining enemy gets knocked down at the last Day.