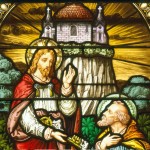 Recently, I’ve noticed people claiming that the Roman Catholic Church is the true Church due to claims about historical succession. Weirdly, often no actual attempt is made to demonstrate from history that such succession exists. Rather, the argument (though not admitted) is from necessity. We need one authoritative Church to be a source of certainty amid competing denominations and doctrines, therefore this one that makes such a claim must be this church, despite the problems in their actual historical documentation.

This sort of argument is weirdly Puritanish. Recall Richard Hooker’s conclusion regarding the puritan critics of the Anglican church, who insisted that a specific form of government for the Church had been explicitly given in Scripture. (I am convinced that Presbyterianism is the most consistent application of Scriptural principles to Church polity–as opposed to Hooker’s episcopal beliefs. But I do share Hookers amazement at some of the claims that are made on behalf of Presbyterian government.) The following is from Book 3, Chapter 11, section 21:

As for those marvellous discourses whereby they adventure to argue that God must needs have don the thing which they imagine was to be done; I must confess I have often wondered at their exceeding boldness herein. When the question is whether God have delivered in Scripture (as they affirm he hath) a complete, particular, immutable form of church polity, why take they that other both presumptuous and superfluous labour to prove he should have done it; there being no way in this case to prove the deed of God, saving only by producing that evidence wherein he hath done it? But if there be no such thing apparent upon record, they do as if one should demand a legacy by force and virtue of some written testament, wherein there being no such thing specified, he pleadeth that there it must needs by, and bringeth arguments from the love or goodwill which always the testator bore him; imagining, that these or the like proofs will convict a testament to have that in it which other men can no where by reading find. In matters which concern the actions of God, the most dutiful way on our part is to search what God hath done, and with meekness to admire that, rather than to dispute what he in congruity of reason ought to do. The ways which he hath whereby to do all things for the greatest good of his Church are more in number than we can search, other in nature than that we should presume to determine which of many should be the fittest for him to choose, till such time as we see he hath chosen of many some one; which one we then may boldly conclude to be the fittest, because he hath taken it before the rest. When we do otherwise, surely we exceed our bounds; who and where we are we forget; and therefore needful it is that our bride in such cases be controlled, and our disputes beaten back with those demands of the blessed Apostle, “How unsearchable are his judgments, and his ways past finding out! Who hath known the mind of the Lord, or who was his counsellor?” (Rom 11.33-34)

The two cases are different in many ways, but both impulses seem to depend upon a demand for a kind of “perfection” that somehow must be true despite all evidence to the contrary.

Jesus left us with an actual church, not an ideal one. We need to be faithful and, in a certain sense, satisfied with what he has left us.